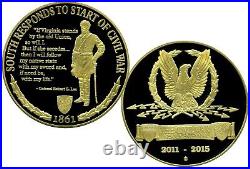 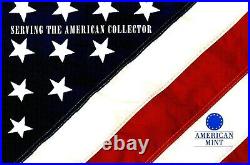 Specially minted to mark the 150th Anniversary of the Civil War. A brilliant tribute to the Confederacy's greatest hero. Features a quote from Lee as he resigns from the Union Army to join the CSA.

Cu, layered in 24k gold. LEE INSPIRATION COMMEMORATIVE COIN PROOF. 150 years ago - with our nation divided over issues of slavery, states' rights, and economic survival - the southern states seceded from the Union to form the Confederate States of America. Like so many Americans caught in the middle, Robert E. Lee, a respected Colonel in the Union Army, was forced to choose between his nation and his state.

In a decision that changed American history, Lee declined command of the Union Army and sided with his home state of Virginia. He soon rose to the rank of General and was given command over the Army and Navy of Virginia. He led his troops with dignity and honor, and his brilliance on the battlefield made him one of the greatest military leaders in our nation's history. Meticulously designed by American Mint - in conjunction with The National Civil War Museum.

For the Sesquicentennial of the Civil War, our exclusive 24k gold-layered coin commemorates the strength and honor of the Confederacy's greatest general. The obverse features a highly detailed engraving of Robert E. And his heart-felt words as he leaves the Union Army to join his beloved home state of Virginia on the side of the Confederacy. This item is in the category "Coins & Paper Money\Coins: US\Commemorative\Mixed Lots".