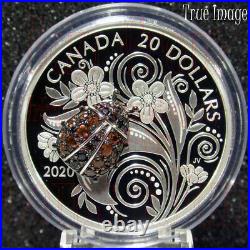 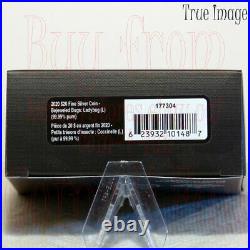 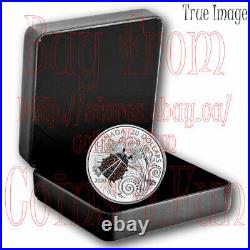 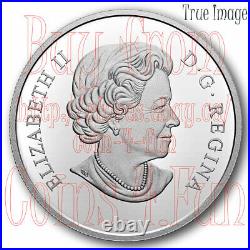 The polka-dotted ladybug is one of our friendliest little garden helpers, and Canadians of all ages find it irresistible. But this rhodium-plated ladybug-the star of our third. Coin-may soon become your favourite. It's adorned with garnet and black sapphire gemstones that make it easy to spot, especially when its sparkle is enhanced by coin's proof finish. What's tiny, round, and if it lands on you, it's considered a sign of good luck?

THE SERIES CONTINUES: This is the third coin in our. Series, which features an insect-shaped jewellery piece mounted on an elegantly engraved 1 oz.

GEMSTONES AND PRECIOUS METALS: Black and white rhodium plating re-create the ladybug's base colours, while garnet and sapphire gemstones give it a spellbinding sparkle. A SHOWPIECE THAT SPARKLES AND SHINES: The engraved reverse is the perfect backdrop to the gemstone-encrusted ladybug, whose beauty is enhanced by the coin's mirror-like surface.

The entire piece shines like it's bathed in light! LOWER MINTAGE THAN PREVIOUS YEARS: Your 2020 ladybug coin has a lower mintage than our 2017 coins, with only 3,000 coins available worldwide. A HIT WITH COLLECTORS AND NATURE LOVERS: This ladybug is every bit as beautiful as the previous coins in the series, 2017's.

INCLUDES SERIALIZED CERTIFICATE: The Royal Canadian Mint certifies all of its collector coins. 1 OUNCE 99.99% PURE SILVER! Your coin is designed from one ounce of pure silver! Design: Designed by Jori van der Linde, the engraved floral pattern on the reverse serves as the backdrop to the jewel-like ladybug that has seemingly landed on the coin's surface.

The beloved insect is instantly recognisable by colour alone, with black and white rhodium plating providing a base for the sparkling arrangement of black sapphire and garnet gemstones. The reverse design includes the words "CANADA", "20 DOLLARS" and the year "2020". The obverse features the effigy of Her Majesty Queen Elizabeth II by Susanna Blunt. The ladybug's bright colour is a big red flag for would-be predators-it's a warning that these critters are.

In fact, a ladybug will "play dead" when threatened and secrete a terrible-tasting fluid from its legs. A ladybug's mandibles move. When it chews, not up and down like your jaw. Just one ladybug can eat thousandsof aphids in its 2 or 3-year lifespan, and that's why they're great to have in any garden-especially if you have roses. Tucked beneath its spotted elytra, a ladybug's wings can beat up to 85 times per second and maintain flight for up to two hours.

Is your ladybug orange or yellow instead of red? Is there an M-shaped marking behind its head? If so, it might be a multicoloured Asian ladybug, which was introduced here in the late 20th century. Of course, ladybugs don't all have the same patterns-in fact, some don't even have spots at all! We know it as a "ladybug" but entomologists prefer "lady beetle" or coccinellid. " And in the United Kingdom, it's known as a "ladybird. Packaging: Your coin is encapsulated and presented in a Royal Canadian Mint-branded maroon clamshell with black beauty box. Jori van der Linde (reverse), Susanna Blunt (obverse).