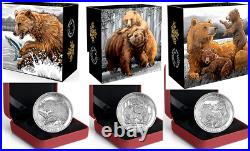 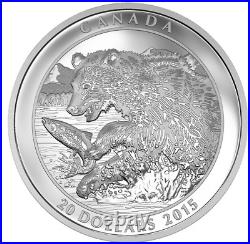 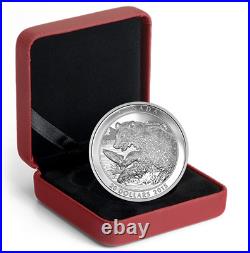 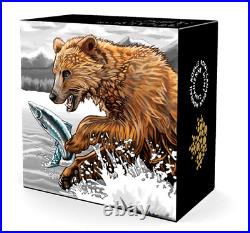 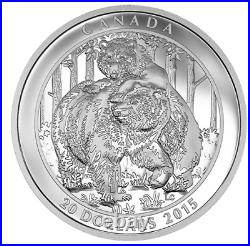 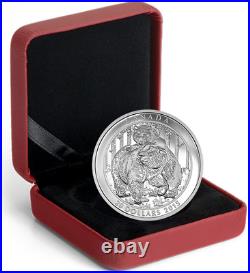 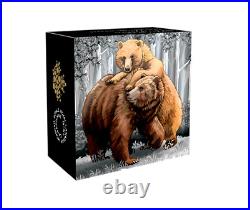 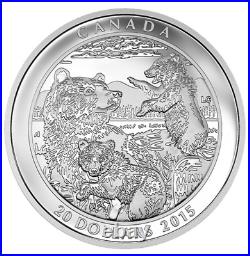 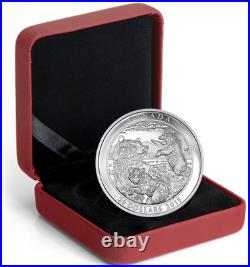 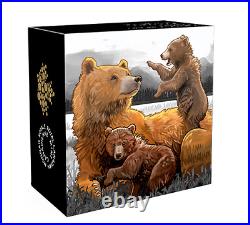 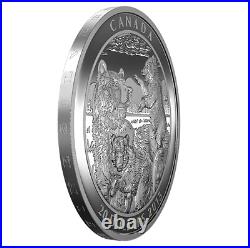 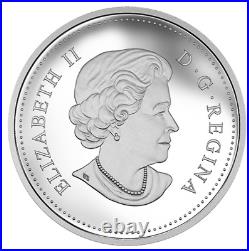 Few animals are as emblematic of Canada's rugged, unspoiled wilderness as the grizzly bear (Ursus arctos). Playing a complex role in the biodiversity of western and northern Canada, this largely solitary animal has long been revered as an important cultural and spiritual symbol. With this superb Grizzly Bear series of coins, the Royal Canadian Mint celebrates the majestic animal by depicting different scenes in the life of a grizzly bear.

With impeccable precision, beautiful edge lettering indicates the coin's metal weight on each of your coins. Your coins are GST/HST exempt and have a limited mintage worldwide.

About the first coin design. Designed by Canadian artist Lauren Crawshaw, your first coin in your subscripton depicts the river valleys of western Canada, where the forests and tall mountains can be seen in the background.

It is the fall salmon run; as the salmon make their arduous journey upstream in the fall, one grizzly bear has waded out into the shallow waters to make the catch of the day. When a fish suddenly jumps out of the water, the grizzly (seen in side profile) lunges forward with majestic strength, its large paws and sharp claws ready to capture its protein-rich meal. Beautiful engraving depicts the grizzly in dimensional detail, from its open-mouthed expression to the long furs that are matted by the water. Each coin in your subscription is encapsulated and presented in a Royal Canadian Mint-branded maroon clamshell with a graphic beauty box. Composition fine silver (99.99% pure).

For many, spring is also a time for finding a mate; during the ensuing mating season from late May to July, the male grizzly bear seeks out any scent trail that leads him to a receptive female. It is a timeless, ritualised process that is essential to the species' survival, and creates touching moments such as the one depicted on this fine silver coin's reverse. Unique edge lettering reveals your coin's metal weight! With impeccable precision, beautiful edge lettering indicates the coin's metal weight. Crafted from 99.99% pure silver, this 1 oz coin offers a warm portrait of two grizzly bears during their courtship.

Second issue in the four-coin grizzly bear fine silver series! Second of a new grizzly bear series of four silver coins, with each one drawing you into the grizzly bear's way of life in the Canadian wilderness. Your coin is GST/HST exempt and has a limited mintage worldwide. Designed by Canadian artist Lauren Crawshaw, your coin features a loving portrait of two grizzly bears forming a bond during the mating season. In the quiet of one of western Canada's forests, a male and a female have come together to begin their brief courtship.

Seen in three-quarter profile but with its head turned to the side, the larger-sized male is on all fours in the grassy area where they have spent the day grazing. The smaller sized female is playfully standing against the side of the male, with large forepaws resting on either side of the male's shoulder hump. But the female's gaze is fixed upon the viewer, as though we are intruding upon an intimate moment. Each coin is encapsulated and presented in a Royal Canadian Mint-branded maroon clamshell with a graphic beauty box. Lauren Crawshaw (reverse), Susanna Blunt (obverse). 1 oz Fine Silver Coin - Grizzly Bear Family - Mintage 6,500 (2015). The third coin in the Grizzly Bear series! A beautiful addition to any nature, wildlife and Canadian-themed collection! Crafted from 99.99% pure silver, this 1 oz.

Coin combines intricate engraving and multiple finishes to create a heart-warming portrait of a female grizzly bear with her two young cubs. A thoughtful gift for those who share a love of art or admire Canada's rugged wilderness and iconic animals. Designed by Canadian artist Lauren Crawshaw, your coin presents a touching portrait of the bond that exists within a family of grizzly bears, which are rendered with finely detailed engraving. With the mountains of western Canada serving as a backdrop, a female grizzly bear is lying in the grass on a warm summer day; her expression is a touching one that is filled with maternal love and attentive devotion to her brood.

One cub playfully stands on its mother's hip with an expressive stance, vocalizing and excitedly moving its forepaws as though communicating a story to its captivated audience. A quieter sibling lies close to the mother, draping itself over the female's forepaw; this cub's head is turned towards the viewer, as though peering hesitatingly out of the coin's image field with an innocent expression. Your coin is encapsulated and presented in a Royal Canadian Mint-branded maroon clamshell with a beauty box.

Composition 99.99% pure silver. Edge plain with edge lettering. This item is in the category "Monnaie\Pièces - Canada\Commémoratif". The seller is "alexsilvercoins" and is located in this country: CA. This item can be shipped worldwide.