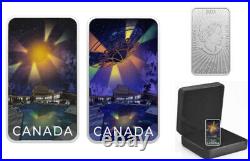 Relive a famous UFO sighting in downtown Montréal! Dubbed the "Montréal Incident, " this famous UFO sighting has been re-created on our fourth. Its colourful, glow-in-the-dark design transports you to the rooftop pool at the Hôtel Bonaventure Montréal on the night of November 7, 1990, when a mysterious object suddenly appeared in the sky. On the coin, the UFO's light beams are enhanced with black light paint technology, which is activated by the flashlight that comes with your coin.

We've even engineered a Fresnel optical effect that alters that way light reflects on the coin, depending on your viewing angle-tilt the coin and you'll see! A UFO in downtown Montréal? From unusual sightings to strange encounters, this series of colourful coins brings you some of Canada's most fascinating tales of unexplained phenomena.

Coin #4 features a colourful re-telling of the Montréal Incident in November 1990, when a UFO was spotted from the rooftop pool at the Hôtel Bonaventure Montréal. A MINT FIRST: FRESNEL BEAMS! On your coin's reverse, the UFO's light beams are enhanced by a Fresnel optical effect-a first for us! An array of features has been engineered in a way that alters the way the light reflects off the coin, so that it appears to move in, out and across the beams depending on your viewing angle. The UFO's bright light beams colourfully lit up the night sky, and they certainly do on your coin's reverse.

Your coin comes with a black light flashlight that activates the embedded black light paint technology, which emphasizes the outline of the UFO and adds an intense, colourful glow to the light beams that are also reflected on the pool surface. Like the 2019 coin that depicted the Shag Harbour Incident, this 1 oz. 99.99% pure silver rectangular coin features a vertical orientation that emphasizes height. It shows the UFO hovering in place above the rooftop pool of the 17-storey building, high above Montréal's busy downtown core.

The obverse's engraved field pattern is a nod to the reverse design, and to the mysterious light beams that were observed by. Witnesses on the night of November 7, 1990. ONE OF OUR MOST POPULAR THEMES! Collectors love a good UFO story.

Whether you're fascinated by UFOs, or you just love a colourful coin that tells a great story, this coin is for you. Of 99.99% pure silver, this rectangular coin is a fun addition to any collection and makes a great gift.

The Royal Canadian Mint certifies all of its collector coins. The reverse design by Canadian graphic design artist Patrick Belanger features the artist's rendition of an aerial UFO phenomenon that occurred on November 7, 1990 in Montréal, Que. The colourful image shows the event from the perspective of those who spotted the object from the rooftop pool at the Hôtel Bonaventure Montréal. The object's bright light beams are amplified by black light paint technology and an engineered Fresnel effect, which varies the intensity of reflected light depending on the viewing angle.

The obverse features a field pattern and the effigy of Her Majesty Queen Elizabeth II by Susanna Blunt. I clearly remember that night, when the whole family was watching a news story about an unidentified object in the Montréal sky, and it totally captured my attention.

This coin design gave me an opportunity to marvel and recreate the energy I felt that evening, and it has rekindled my childhood fascination with UFOs. This is my second project within the. Series and I can truly say that these coins are among my favourites! The stories are mysterious and intriguing, and they will open your mind to the possibility that UFOs exist.

The Place Bonaventure UFO was seen by dozens of witnesses as it seemed to hover over the hotel's rooftop pool. Guests alerted hotel staff, including a security guard, who in turn called a newspaper reporter, all of whom said they watched the stationary object hanging in the sky, displaying an odd "clocklike" pattern of lights. Photos taken that night remain hotly disputed as to what they depict: A reflection of underwater pool lights? Spotlights on a nearby skyscraper?

Even RCMP were mystified that night, and the incident is still regarded today as one of Canada's most curious UFO cases. This was a fun design to model since I stayed at this hotel a few years after the Montréal Incident. Given the three-quarter perspective, I thought it would be wise to create concentric ovals radiating from the UFO and a Fresnel lens effect for the six beams of light-this helps reflect the light in a unique way. For the colour application, the challenge was to align the paint files with the many straight, hard lines in the design-buildings, windows, steps, pool deck and swimming pool-and this made for an interesting effect as the light beams can also be seen on the pool surface. The incident depicted on your coin isn't the only time a UFO was spotted in Montréal-according to the annual Canadian UFO survey, it's one of the Canadian cities with the most reported sightings each year.

November 7, 1990, 7:20 p. A tourist was enjoying a relaxing swim in the rooftop pool of the Hôtel Bonaventure Montréal, when suddenly, green and yellow light beams emanating from a large, metallic object lit up the night sky. The woman alerted the lifeguard, who called the hotel's security guard; soon, guests, hotel staff and management had gathered to view this anomalous aerial object, which continued to hover in place.

When the light beams suddenly became brighter, police were called in. Baffled, the first officer on the scene contacted his superiors, and before long, the Royal Canadian Mounted Police, the Canadian military and even NASA (National Aeronautics and Space Administration) were reportedly looking into this strange object.