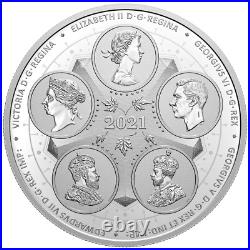 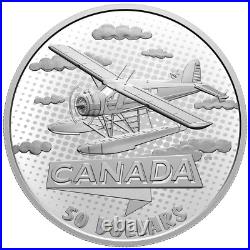 In the first 100 years of Confederation, the story of Canada was shaped by our efforts to bridge distances and come together - first by rail, then by sea, and finally, by air. It is the story that unfolds in the Royal Canadian Mint's The First 100 Years of Confederation series, a three-part celebration of some of the mechanized history makers that helped shape a modern Canada. The reverse features a Canadian-built de Havilland DHC-2 Beaver aircraft that symbolizes the era in which Canada championed peace and celebrated its centennial. Composition: 99.99% pure silver. Packaging: Black clamshell with black beauty box.

Finished Size: 118 mm x 97 mm. Each coin is a separate chapter represented by a different mode of transportation and art style. Five effigies on one coin. The obverse features the effigies of five monarchs whose combined reigns span a century of change. Each effigy is accompanied by a Latin inscription stating the monarch's name and royal title, as seen on some of Canada's most historic coins.

Be one of the privileged few to own this 99.99% pure silver coin. Mintage is limited to just 1,250 worldwide. This item is in the category "Coins & Paper Money\Coins: Canada\Commemorative". The seller is "westedmontoncoinandstamp" and is located in this country: CA. This item can be shipped to Canada, United States.