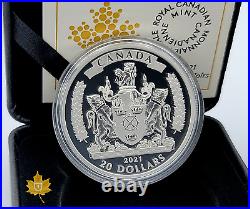 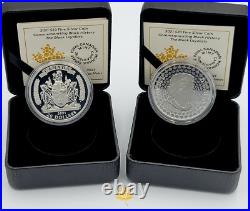 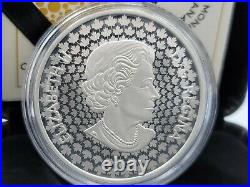 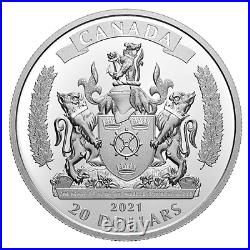 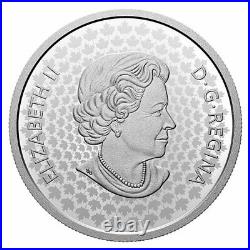 Your coin is individually encapsulated and presented in a Royal Canadian Mint-branded clamshell with a black beauty box. Very Low Mintage 5,500 Worldwide.

They sought freedom and a better life here. But the hardships they endured are a reminder of how complex our history can be. Their triumphs and tribulations are a fundamental part of Canada's story that should be. And remembered, as they are on this pure silver coin, which features the armorial bearings of the Black Loyalist Heritage Society.

A TRIBUTE TO BLACK LOYALIST SETTLERS: The 2021 coin shines the spotlight on the Black Loyalists who settled in present-day Canada in late 18th century. A SYMBOL OF THE PAST AND PRESENT: On the coin's reverse, the armorial bearings of the Black Loyalist Heritage Society. The trailblazers of the past and those who safeguard their memory today. SUBTLE FIELD PATTERN: A symbol of Canada, the maple leaf adds a symbolic flourish to the reverse and forms a repeating pattern on the obverse. IMPORTANT CHAPTER IN CANADIAN HISTORY: A powerful addition to your history-themed collection, this collectible tribute to Black Loyalists.

The contributions they made to Canada's story and identity. Before, during and after the American Revolution, hundreds of Black Loyalists settled in the Niagara Peninsula, along the St. Lawrence River, and in the Eastern Townships. But the large majority of Black Loyalists, roughly 3,000 of them, landed in Nova Scotia and present-day New Brunswick in 1783. They settled in areas such as Halifax, Annapolis Royal, Fort Cumberland, Shelburne, Port Mouton, Saint John, and along the Saint John River; they also established communities in Tracadie and in Birchtown, N.

Then the largest settlement of free Black people outside of Africa. For many Black Loyalists, the promise of a better life went unfulfilled: climate and agricultural conditions here were harsh; the land grant system. White Loyalists; and unemployment, lower wages and discrimination were the norm. Tensions mounted in some places, and in 1784, a mob of disbanded soldiers targeted Black Loyalists in Birchtown and Shelburne, N. In the first recorded race riot in North America. Disillusioned, about 1,200 Black Loyalists left Nova Scotia in 1792 to build a new life in the West African country of Sierra Leone. Those who remained in British North America helped re-define Canada's history and character, and today, the descendants of Black Loyalists can lay claim to an extraordinary legacy of courage and perseverance. Not all Black Loyalists were free, white Loyalists brought enslaved persons with them when they settled in British North America (Canada). It was only in 1807 that the slave trade was prohibited throughout the British Empire, including present-day Canada, while slavery itself was abolished in 1834. This item is in the category "Coins & Paper Money\Coins: Canada\Commemorative". The seller is "canadacoinchest" and is located in this country: CA. This item can be shipped worldwide.