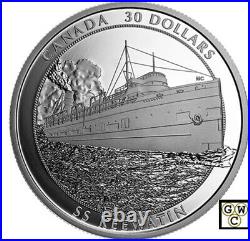 A historic steamship appears on both sides of your coin. Five years older than Titanic,' SS Keewatin was built in 1907 in Govan, Scotland, in the same Edwardian-era tradition-and with a similar focus on luxury, comfort, and class-as the famous ocean liner. After crossing the Atlantic, Keewatin entered service in 1908 as part of CPR's Upper Great Lakes fleet. And for more than 50 seasons, her lake route was the two-and-a-half-day run from her home port of Port McNicoll, Ont. To another key CPR terminal, Port Arthur/Fort William (now Thunder Bay), Ont. She was eventually retired on November 28, 1965. The last Edwardian steamer delivered tens of thousands of immigrants, moved troops in both World Wars and introduced tourism to the Canadian North and West. Her design has been praised by Frank Lloyd Wright, immortalized in movies and TV shows, and she still attracts media attention today.

DUAL-SIDED DESIGN: The obverse shows the reverse design-and SS Keewatin-from a different perspective: the reverse shows the bow while the obverse is a view of the stern. BEAUTIFUL ART, FASCINATING HISTORY: An elegant tribute to SS Keewatin, a historic CPR passenger steamship that plied the waters of Georgian Bay and Lake Superior between 1908 and 1965. WEALTH OF FINE DETAILS: From the escutcheon (stern) to the raised anchor, this design features a wealth of fine details that may only reveal themselves with repeat viewings. DENTICLES FORM A FRAME: Classic denticles form a frame around the portrait of Keewatin on both sides and around the effigy on the obverse. There's also a sense of movement: by overlapping the frame, Keewatin appears to be steaming into the coin on the obverse and out through the reverse. LOW MINTAGE: A low mintage of just 3,000 coins worldwide.

INCLUDES SERIALIZED CERTIFICATE: The Royal Canadian Mint certifies all of its collector coins. 99.99% PURE SILVER COIN: No GST/HST. The reverse design features a starboard bow view of SS Keewatin in service in the Canadian Pacific Railway Upper Lake fleet between 1908 and 1965. The obverse features the framed effigy of Her Majesty Queen Elizabeth II by Susanna Blunt beneath the port stern view of Keewatin, as she plies the waters between Port McNicoll, Ont.

And Port Arthur/Fort William (present-day Thunder Bay), Ont. In designing this coin, I tried to convey a sense of the opulence and romance of travelling on Keewatin in her heyday.

Before being towed through the locks and reassembled in Buffalo, N. The not-for-profit group is largely comprised of dedicated volunteers who are committed to restoring and preserving the passenger liner. Your coin is encapsulated and presented in a Royal Canadian Mint-branded clamshell with a black beauty box. Composition 99.99% pure silver. Artist Matt Conacher (reverse), Susanna Blunt (obverse). This item is in the category "Coins & Paper Money\Coins: Canada\Commemorative". The seller is "gatewestcoins" and is located in this country: CA.