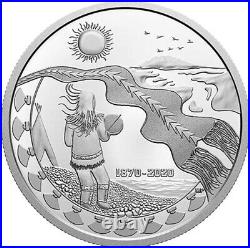 178107 Mintage 2,500 Composition 99.99% pure silver Finish proof Weight (g) 62.69 Diameter (mm) 50 Edge serrated Certificate serialized Face value 30 dollars Artist Myrna Pokiak (reverse), Susanna Blunt (obverse). The Northwest Territories turns 150! Celebrate a milestone anniversary in 2020! It was 150 years ago, in 1870 that the transfer of Rupert's Land and the North-Western Territory resulted in the establishment of Canada's first territory. The flora, fauna, landscapes and diverse peoples of the Northwest Territories have made it a cherished part of our Canadian family.

Its story is closely tied to the surrounding territories and provinces that were carved from its initial size in 1870. A STORYTELLING TRADITION: The coin's reverse design is a timeless celebration of life in the Northwest Territories, and every engraved detail has symbolic meaning-from the midnight sun to the ulus that represent the 11 official languages. INCLUSIVE: Through the various motifs, the reverse design also celebrates the diversity of the cultures represented in the Northwest Territories.

TIMELESS: The timelessness of the artistic symbols in this design could easily speak to the history of the Northwest Territories, or its identity today. It carries a powerful message about traditions passed from generation to generation. LOW MINTAGE: Limited to just 2,500 coins worldwide. Design: The reverse design by Inuvialuk artist Myrna Pokiak is an artistic celebration of life in the Northwest Territories.

Beneath the midnight sun, migratory birds in flight symbolize a connection with the rest of Canada and the world. Landmarks (pingos, waterways) that define the North from the Mackenzie River to the Arctic Ocean represent both the land and water that have nurtured countless generations. A sash bearing an arrow pattern honours the Northwest Territories Métis, while below, the tipi represents the Dene. The Inuvialuit are represented by 11 ulus - one for each of the official languages of the Northwest Territories.

Just above the ulus, the young girl is drumming and dancing to the songs in her heart; representing an artistic expression of pride in the people and traditions that shape life in the North. The obverse features the effigy of Her Majesty Queen Elizabeth II by Susanna Blunt. Canada's Northwest Territories is vibrant with culture. Indigenous cultures that have been here since time immemorial continue to root and centre heritage, language, arts and traditional ways of life. Artwork, such as this beautifully illustrated coin, celebrates our diversity and our unity, and will share this vision for generations to come. Johanna Tiemessen, Manager, Arts and Fine Crafts, Government of the Northwest Territories Did you know... Canada has two official languages, English and French, but the Northwest Territories have nine more for a total of 11 official languages. They are: Chipewyan, Cree, Tlicho, Gwich'in, North Slavey, South Slavey, Inuktitut, Inuvialuktun, Inuinnaqtun, English and French.

In 1870, the North-West Territories (renamed the Northwest Territories in 1906) was a vast expanse of land that stretched from northern Quebec west to British Columbia. It included all of present-day Yukon, Alberta and Saskatchewan, as well as parts of Nunavut, Manitoba, Ontario, Quebec and Newfoundland and Labrador. Its boundaries were extended north with the addition of the Arctic Archipelago in 1880. The boundaries of the Northwest Territories have shifted over the years with the creation of new territories and provinces. By 1905, it still represented 34% of Canada's total landmass.

The last big boundary change was in 1999 with the creation of Canada's third (and youngest) territory, Nunavut. Packaging: Your coin is encapsulated and presented in a Royal Canadian Mint-branded clamshell with a black beauty box. This item is in the category "Coins & Paper Money\Coins: Canada\Commemorative". The seller is "gatewestcoins" and is located in this country: CA. This item can be shipped to Canada, United States.