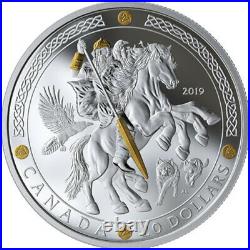 Odin is the second of three coins dedicated to the powerful Norse gods. Your coin combines both antiqued finish and selective gold plating on both sides. Your coin combines Norse art-inspired elements and a historic artefact frame both sides of your coin! Like a relic of the past, your coin's antiqued finish mimics the appearance of an aged artefact!

Selective gold plating highlights the spear, helmet, and two different symbols (the Valknut and the Triple Horn) of Odin on the reverse. Gold plating also highlights key elements along the rim, as well as the effigy on the obverse. The Royal Canadian Mint certifies all of its collector coins. Limited to 3,500 coins worldwide. Your coin is crafted from one ounce of 99.99% pure silver.

The reverse image by Alexandra Lefort finds Odin on his eight-legged horse, Sleipnir. One of Odin's raven informants, Huginn ('Thought'), is perched on his shoulder while the other, Muninn ('Memory'), flies alongside him. His two wolf companions, Geri and Freki, also accompany him. Selective gold plating highlights Odin's helmet, arm guard and infallible spear (Gungnir), as well as two different emblems associated with the Norse god of war and wisdom: the Valknut ('knot of the fallen') and the Triple Horn of Odin. The obverse features the gold-plated effigy of Her Majesty Queen Elizabeth II by Susanna Blunt.

Your coin is encapsulated and presented in a Royal Canadian Mint-branded clamshell with a black beauty box. Composition 99.99% pure silver with gold plating. Artist Alexandra Lefort (reverse), Susanna Blunt (obverse). This item is in the category "Coins & Paper Money\Coins: Canada\Commemorative".