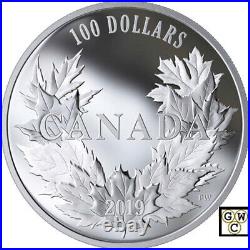 Pure Silver Coin - Canadian Maples - Mintage: 500 (2019). It is one of Canada's classic coin designs, and it is the inspiration for your soon-to-be classic collector piece that has a decidedly traditional feel. Our modern-day tribute has replaced the Victorian boughs with a wreath of different maple leaves-one from each of the 10 species that are native to Canada. These are also the leaves that inspired the Dominion Sculptor's motifs for the new interim Senate chamber in Ottawa, where they add a touch of Canada's natural heritage to glass panels, wood doors, and wall panels. All of Canada's maples are together on this sculpted tribute to a classic design!

A MODERN PIECE WITH A TRADITIONAL FEEL! Your pure silver coin features a more traditional take on Canada's different maple leaves, as designed by the Dominion Sculptor of Canada.

A NOD TO CANADA'S EARLY COIN DESIGNS! DESIGNED BY PARLIAMENT HILL'S MASTER CARVER! The focus of your coin is on the sculpting, and with good reason: your coin was designed by Dominion Sculptor Phil White, Canada's master carver on Parliament Hill. There are no colour enhancements or special technology on your coin-this piece is all about world-class sculpting, with well-defined lines and a crisp impression against an expert proof finish. OUR FIRST COIN TO FEATURE ALL 10 CANADIAN MAPLES! Each leaf represents one of 10 maple species that are native to Canada-from the towering bigleaf maple to the shrub-like vine maple. Previous coins have featured one or several species, but this is the first coin to feature all 10 together in one design. Only 500 coins will be made worldwide. The Royal Canadian Mint certifies all of its collector coins.

The maple-themed arrangement features one leaf from each of Canada's 10 native Acer species, which are (clockwise from top right): the bigleaf maple A. Nigrum and silver maple A. Also engraved on the reverse are the face value'100 DOLLARS', the word'CANADA', and the year'2019'. The obverse features the effigy of Her Majesty Queen Elizabeth II by Susanna Blunt.

As Dominion Sculptor, Philip White is responsible for the conservation and creation of sculptures and artwork that adorn Canada's Parliamentary Buildings in Ottawa, Ontario. The iconic Centre Block building was purposely left unfinished, even after the Peace Tower was inaugurated in 1927, with thousands of uncarved stone blocks that have since allowed sculptors to tell Canada's story as it unfolds. Wyon's crossed maple bough design made its debut on the Province of Canada's coins in 1858, when the decimal system was first introduced.

Although it preceded Confederation by nearly a decade, it was prominently featured on the first coins struck for the Dominion of Canada in 1870. Different variations of the design continued to appear on Canada's silver denominations (5, 10, 25 and 50 cents), but it was superseded by new designs in 1937. Your coin is encapsulated and presented in a Royal Canadian Mint-branded maroon clamshell with a black beauty box. Composition 99.99% pure silver. Artist Philip White (reverse), Susanna Blunt (obverse).