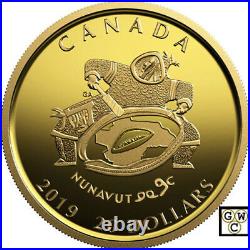 Its name is a proud declaration that means'our land' in Inuktitut. On April 1, 1999, Canada's newest territory, Nunavut, formally came into existence, following the division of the Northwest Territories.

The creation of Nunavut marked the culmination of more than two decades of negotiation between the Inuit of the Eastern Arctic and the federal government. The creation of Nunavut and its public government provided Inuit, who constitute a majority of the jurisdiction's population, with the ability to lead their territory-a cherished homeland with a cultural heritage that has endured for thousands of years. The commemorative piece is precision-crafted from Nunavut-sourced gold. Only the second coin of its kind, it was struck on an innovative thin blank that offers the affordable gold content of a 1/10 oz.

Coin, but with a % larger diameter. Your coin, designed by Inuk artist Germaine Arnaktauyok, was crafted from gold mined in Nunavut! Following in the footsteps of another Arctic-themed coin, the 2018 Symbols of the North, this is only the second coin to be struck on an innovative thin blank. You get the gold content of a 1/10 oz. Gold coin, but with a % larger diameter.

Fittingly, this celebration of Nunavut is crafted from 0 Nunavut-sourced gold. It was sourced from two different mines-Agnico-Eagle Mines' Meadowbank Gold Mine and TMAC Resources' Doris North Mine-and refined in our state-of-the-art facility here in Ottawa. Germaine Arnaktauyok is a world-renowned Inuk artist whose prints and etchings are inspired by Inuk myths and a traditional way of life. 99.99 % PURE GOLD COIN: NO GST/HST. Designed by Inuk artist Germaine Arnaktauyok, your coin features an Inuk drum dancer bearing an outline map of the territory.

Within the map, a traditional stone oil lamp (qulliq) is a source of warmth and security, and a beacon of hope for the future. Beneath the dancer is the lettering'NUNAVUT ('Nunavut' in Inuktitut). The obverse features the effigy of Her Majesty Queen Elizabeth II by Susanna Blunt. Nunavut spans a territory of roughly 2,000,000 square kilometres, or about 1/5 of Canada's total land mass. Its creation represents the largest land claim settlement in Canada's history.

The idea of a new territory was studied in 1973 and proposed in 1976, when the federal government was asked to divide the former Northwest Territories into eastern and western regions to settle Inuit land claims. Negotiations continued until the Nunavut Political Accord in 1992; this agreement set April 1, 1999, as the date for the creation of Nunavut. Nunavut is home to 25 communities, including Canada's northernmost settlement, Grise Fiord. None of these are linked by road or rail-all are accessible only by air or sea.

Nunavut has four official languages: English, French, Inuktitut, and Inuinnaqtun. Your coin is encapsulated and presented in a Royal Canadian Mint-branded clamshell with a black beauty box. This item is in the category "Coins & Paper Money\Coins: Canada\Commemorative". The seller is "gatewestcoins" and is located in this country: CA.