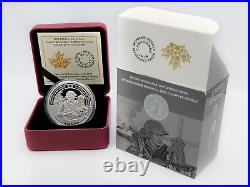 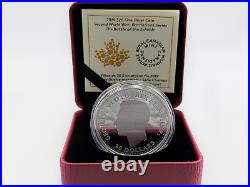 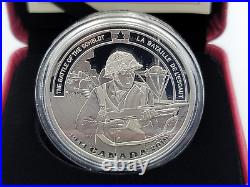 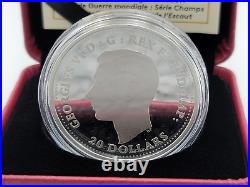 Your coin is encapsulated and presented in a Royal Canadian Mint-branded clamshell with a custom beauty box. Coin & box may have minor imperfections. Mintage just 7,500 worldwide. Commemorates the 75th anniversary of the Battle of the Scheldt that helped forge the close bond between Canada and the Netherlands.

The close bonds between Canada and the Netherlands were forged during the Second World War, when our histories became entwined on the shores of the Scheldt River. Our eighth Battlefront coin commemorates the 75th anniversary of the Battle of the Scheldt (2 October - 8 November 1944), one of Canada's key contributions to the Allied victory in Europe. This coin design captures the intensity of a battle in which every advance was a deadly struggle to seize the high ground. For the First Canadian Army, the Scheldt was their most grueling campaign yet. But for the Dutch, it marked the beginning of the end of a brutal occupation, and the deepening of a friendship between two countries.

EIGHTH COIN IN THE SECOND WORLD WAR - BATTLEFRONT SERIES: This 1 oz. Coin commemorates the 75th anniversary of the Battle of the Scheldt (1944), a critical battle for the First Canadian Army. A HISTORIC EFFIGY: Like all Canadian coins issued in 1944, this pure silver coin features the historic effigy of King George VI by T. INCLUDES INSIGNIA OF THE FIRST CANADIAN ARMY: The proud insignia of the First Canadian Army tops the design and emphasizes Canada's key role in securing port access to Antwerp in the fall of 1944. CLOSE CONSULTATION: We worked closely with Canadian and Dutch historians/military experts to ensure historical accuracy and achieve a beautifully engraved design that is as precise as possible. EXCLUSIVE SERIES-WIDE PACKAGING: All our Second World War-Battlefront Series coins (including this one) are packaged in a clamshell case and a custom beauty box. Collect every coin in the series and place the boxes spine to spine-together, they form a complete timeline of Canada's military engagements during the Second World War. INCLUDES SERIALIZED CERTIFICATE: The Royal Canadian Mint certifies all of its collector coins. PURE SILVER: Your coin is crafted from 99.99% pure silver!

The insignia of the First Canadian Army appears above the infantryman, who wields a Bren gun while advancing past a tower mill. A Wasp MKII C flamethrower universal carrier backs the infantry advance from atop an embankment near the Scheldt River. The obverse features the effigy of King George VI by T. Canada at the Battle of the Scheldt (1944).

By the fall of 1944, overextended supply lines had slowed the Allies' rapid advance into Northwest Europe. Securing a deep-sea port closer to the front was of paramount importance; fortunately, the Allies had seized Europe's second-largest seaport, Antwerp (Belgium), in September.

But the port was of little use without access to the North Sea: both sides of the Scheldt Estuary were held by more than 100,000 of the Wehrmacht's best troops. Thus, the task of securing the 70-kilometer-long corridor was assigned to the First Canadian Army, supported by British and Polish formations. On 2 October, the 2nd Canadian Infantry Division, backed by 4th Canadian Armored Division, launched the first phase of the offensive along the north bank. They established a foothold on the South Beveland isthmus (known as "polder country") before clearing the peninsula in the third phase, Operation Vitality (24-31 October). Meanwhile, the second phase (Operation Switchback) began on 6 October when the 3rd Canadian Infantry Division moved to clear the Breskens pocket on the south shore.

Backed by British air support and artillery, Wasp flamethrowing carriers led the charge across the Leopold Canal, while the infantry launched an amphibious attack along the coast. The final phase, Operation Infatuate, saw the Allies storm the heavily fortified Walcheren Island. Bombers targeted the perimeter dikes and flooded 4/5 of the land to allow an amphibious assault. The Canadians (and later the 52nd British Division) attacked the island's only land approach: a causeway too narrow for tanks. Middelburg fell on 6 November; 8 November, the last pockets of resistance were cleared and a major minesweeping operation was underway in the Scheldt River.

The terrain was flat and roads were built on top of dykes and other embankments... As were the enemy's defenses. Weapons were often positioned on the reverse (back) slopes, including deadly Nebelwerfer rocket launchers. Trees were cut down and placed in fields, then connected by barbed wire and mines; dubbed Rommel Asparagus, these were deadly obstacles for paratroopers.

Mines were also laid beneath main roads while dikes were cut to flood the lowlands. Canadians quickly learned they couldn't dig foxholes or trenches more than a foot deep before water filled them in.

Cold weather did little to ease the wet conditions, while the mud slowed both man and machine. Canada suffered a total of 6,367 casualties during the five-week battle, including the loss of 3,650 men from the 2nd Canadian Division. On 13 October 1944 - "Black Friday" - the lead company of the Black Watch Regiment suffered the second-worst single-day disaster in the Regiment's history.

The company of 90 men was reduced to just four survivors, and all four of its commanders were among the casualties. The enemy hoped to re-capture Antwerp by launching a major offensive in December 1944: the Battle of the Ardennes, also known as the Battle of the Bulge.

Pushing through France and Belgium, the First Canadian Army was tasked with clearing coastal areas, including disabling the V rocket launch sites that had targeted southern England. But the port of Antwerp quickly became the next target during the Battle of the Scheldt - in fact, it was the most targeted city between 14 October 1944 and 30 March 1945, when an estimated 1,214 V-1 flying bombs and V-2 supersonic rockets struck the Allied-controlled port. This item is in the category "Coins & Paper Money\Coins: Canada\Commemorative". The seller is "canadacoinchest" and is located in this country: CA. This item can be shipped worldwide.