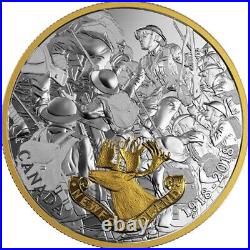 FIRST WORLD WAR ALLIED FORCES: NEWFOUNDLAND. Before we were one nation, we were brothers-in-arms. The second coin in our First World War Allies series highlights Newfoundland's wartime contributions as an independent dominion during the First World War. Paired with an image that defines heroism, the gold-plated insignia of the Royal Newfoundland Regiment speaks of valour and sacrifice in places like Monchy-Le-Preux and Beaumont-Hamel. The reverse image by Canadian artist Pandora Young places the viewer at the heart of the action during the First World War, in the muddy trenches that defined the war on the Western Front. Multiple finishes give the engraved design a sense of depth as a crowd of soldiers of the Royal Newfoundland Regiment rush to the ladders and go over the top. Not one soldier looks back - all eyes are focused on the climb and what lays ahead; it is a testament to the heroic fighting spirit of Newfoundlanders who, time after time, mustered their courage and placed themselves in harm's way in the name of the Allied cause.

Selective gold plating highlights the regimental insignia of the Royal Newfoundland Regiment, which features a woodland caribou defiantly facing the enemy. The selectively gold-plated obverse features the effigy of King George V by Sir E. SECOND IN A FOUR-COIN SERIES: As we approach the 100th anniversary of the Armistice of 11 November 1918, this four-coin series reflects on the wartime contributions of select Allied forces who were united in a common cause and bound by heroism and duty. FOUR ALLIES, ONE LAST PUSH: Like Canada, Newfoundland was an independent dominion during the First World War; the second coin in our First World War Allies series highlights the tremendous wartime contributions and sacrifices of Newfoundlanders. THE IMAGE OF HEROISM: The scene on the reverse features an outstanding amount of engraved details!

Multiple finishes add a sense of depth to a poignant design, which showcases the courageous spirit of the Royal Newfoundland Regiment in the trenches that were a defining experience of the Great War. SELECTIVE GOLD PLATING: Like all coins in this limited series, selective gold plating adds a fitting gleam to the regimental insignia of the Royal Newfoundland Regiment.

FOR KING AND COUNTRY: Selective gold plating also highlights the effigy of King George V; otherwise, the obverse resembles that of all Canadian coins issued during the First World War. COLLECT ALL 4 COINS FOR THE COMPLETE STORY! It's a touching memorial to all the combatants-one that goes beyond borders to put a face on the Great War.

This item is in the category "Coins & Paper Money\Coins: Canada\Commemorative". The seller is "gatewestcoins" and is located in this country: CA.