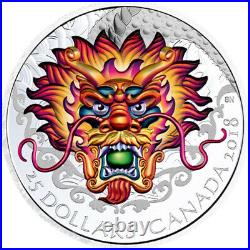 Engraved in ultra high relief, the colourful Chinese dragon rises up from the coin to celebrate the cultural aspect of dragon boat racing and the spirit of its participants, who paddle to the sounds of the drum that is the boat's beating heart. DESIGN The reverse image by Simon Ng is a colourful, dynamic fusion of traditional symbolism and contemporary minting techniques.

An auspicious pattern of stylized, foam-tipped waves fills much of the field, where the engraved lines convey movement in the water. Engraved in ultra high relief, a Chinese dragon rises up from the flat surface of the coin, where the serpentine neck alludes to the typical shape of a boat. An application of colour adds dazzling reds, oranges and blues to this revered figure of Chinese mythology, who holds a green pearl of wisdom that symbolizes the active yang aspect of qi, the life force that surrounds us. SPECIAL FEATURES - A MODERN SPORT WITH AN ANCIENT PAST: A dazzling showpiece that celebrates the cultural tradition of dragon boat racing, and the festivals held annually in several Canadian cities. ULTRA HIGH RELIEF ENGRAVING: Struck several times to ensure crisp lines and maximum depth, the dragon's carefully sculpted head rises up from the coin's flat surface, like a dragon emerging from the engraved waves.

CAPTURES THE COLOURFUL PAGEANTRY: Highlighted by the application of colour over the engraving, the dragon's head on the reverse is every bit as a colourful as the elaborately painted dragon boats. TRADITION MEETS CONTEMPORARY: In addition to its colour-over-engraved features, the traditional depiction of a Chinese dragon is rich in symbolism and includes a few modern design elements, such as the stylized background that adds an outstanding amount of etched details.