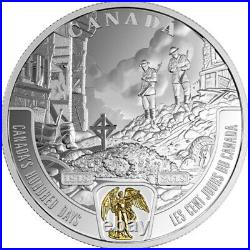 They were Canada's Hundred Days: From August 8 to November 11, 1918, Canadian troops cemented their reputation as an elite fighting force with a string of costly victories that stretched from Amiens to Mons. The reverse of this commemorative coin reflects on Canada's great military successes and its sacrifices during those Hundred Days, the penultimate chapter in our First World War: Battlefront series. Inspired by a soldier's account, the reverse image by Joel Kimmel looks beyond the tactical successes of Canada's Hundred Days to reflect on the notions of sacrifice and loss. The scene pulls away from the front lines to show the aftermath of the battle in a nearby town, where smoke still billows in the distance.

Broken stones and rubble are piled in a street lined with buildings that have been damaged by artillery. With their Lee Enfield rifles slung over their shoulders, two Canadian soldiers are seen standing on a pile of debris and looking down at a small clearing, where a single cross within a circle marks the makeshift grave of a Canadian soldier. The soldiers have paused to remember their fellow combatant, while noting the flowers that were placed on the tomb by civilians as a show of respect.

Below the image is the selectively gold-plated figure of "Victory, " from the bronze-hued Victory Medal awarded to Allied soldiers in 1919. The obverse features the effigy of King George V by Sir E. Seventh coin in our First World War: Battlefront Series, and the penultimate coin in a multi-year chronicle of Canada's role on thebattlefields of the First World War. To all that was won and all who were lost.

The makeshift grave amid the rubble is a reminder of the personal sacrifices behind each battle victory during Canada's Hundred Days. Modern engraving techniques and finishes bring this complex design to life and help set apart some of the smaller details that carry special meaning, including the flowers laid on the fallen soldier's grave. Selective gold plating puts special emphasis on the winged figure of "Victory, " as depicted on the Victory Medal awarded to members of the Allied forces after the First World War. Like all Canadian coins minted between 1914 and 1918, the coins in this retrospective series feature the historic effigy of King George V by Sir E. Mackennal, but with a touch of selective gold plating to add a golden shine.

Your coin is packaged in a specially designed beauty box that is unique to the Battlefront series! When placed spine-to-spine, your completed series stands as a visual timeline of Canada's major battles of the First World War. Composition: 99.99% pure silver. Packaging: Maroon clamshell with a graphic beauty box.