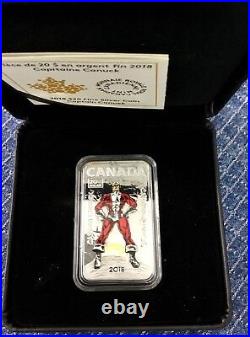 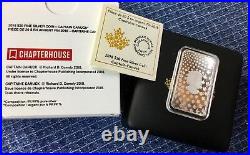 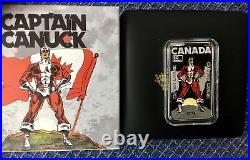 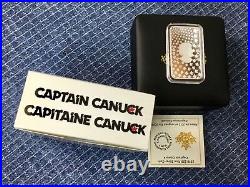 More than a homegrown comic book hero, Captain Canuck personifies the spirit of Canadians by embodying self-sacrifice, determination, and integrity, and all with a full dose of humility and compassion. This comic book-shaped coin is the ultimate tribute to a Canadian pop-culture icon created in 1975; your coin re-creates elements of Richard Comely's cover art from Captain Canuck No. 1, which introduced a new, uniquely Canadian hero-one who fights for justice and peace while wearing the colours of our nation's flag!

A perfect coin for Captain Canuck comic book fans! COVER ART ON A COMIC BOOK-SHAPED COIN! Your coin is rectangular like a comic book and is a fitting tribute to a Canadian hero and pop-culture icon!

Your coin mimics the cover art of Captain Canuck No. 1, which introduced a new, uniquely Canadian hero to comic book fans! Both the coin and the packaging feature the art of co-creator Richard Comely! The selective use of colour recreates the vibrant red and white of Captain Canuck's iconic suit, which is also a tribute to Canada.

JULY 1, 1975: A CANADIAN HERO IS BORN! Your coin is a unique addition to any Canadian history or pop culture-themed collection. The Royal Canadian Mint certifies all of its collector coins.

Limited to 3,500 coins worldwide! Your coin is GST/HST exempt. Utilizing the coin's rectangular shape, the reverse mimics the appearance of a comic book - specifically the cover of Captain Canuck No. Key elements from the original cover art by Richard Comely are faithfully replicated by combining precision engraving, various frostings and a selective colour application.

The focus is primarily on Captain Canuck, who strikes a defiant pose as he stands on rugged terrain, while the yellow sun hangs low in the northern sky. His maple leaf suit is based on the real-life colours of the large Canadian flag engraved behind him, which further emphasizes the character's Canadian roots.

The reverse includes the engraved word "CANADA" above a corner box element bearing the face value "20 DOLLARS"; "CAPTAIN CANUCK" and "CAPITAINE CANUCK" are engraved on either side of the hero, while the year "2018" is engraved on the land mass below. A laser-engraved maple leaf pattern fills the obverse, which features the effigy of Her Majesty Queen Elizabeth II by Susanna Blunt.

Captain Canuck has had several alter egos and different uniform variations over the years-including his modern-day uniform, complete with armour and electrified nightsticks! But the maple leaf and colours, which mirror Canada's national flag, have been constants since his original suit. As part of a tribute to Canadian superheroes, Canada Post released a Captain Canuck stamp in 1995. Transcending the pages of his comic book, Captain Canuck was also featured in an animated series. Originally created in 1975, Captain Canuck was given life by cartoonist Ron Leishman and author/artist Richard Comely.

The comic book's explosive first issue introduced Tom Evans, the first Captain Canuck, whose superhuman strength and speed were the result of an alien encounter. Soon after, Captain Canuck and his sidekicks Redcoat and Kebec teamed up to battle villains such as the treacherous Blue Fox, the alien Nyro-Ka, and Captain Canuck's arch nemesis, Mr. Your coin is encapsulated and presented in a Royal Canadian Mint-branded clamshell with a graphic beauty box. Diameter (mm)49.80 x 28.60. ArtistRichard Comely (reverse), Susanna Blunt (obverse).

This item is in the category "Coins & Paper Money\Coins: Canada\Commemorative". The seller is "flying-coins" and is located in this country: CA. This item can be shipped to Canada, United States.