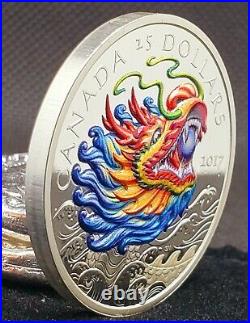 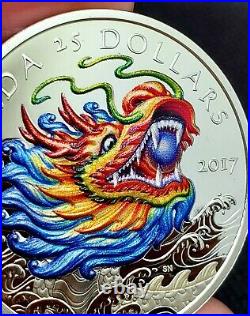 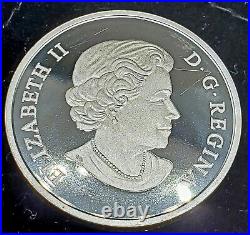 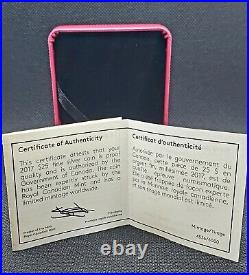 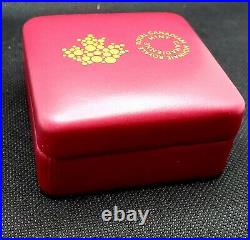 Celebrate the ancient cultural traditions of Chinese-Canadians! Born on the rivers of China, dragon boat racing is at the heart of a 2,000-year-old cultural tradition that is steeped in folklore and full of pageantry. Beautifully engraved in ultra-high relief, the selectively coloured dragon on your coin is a timeless and strongly symbolic representation of the Dragon Boat Festival.

Look closely at its positioning among the waves-its curved neck mimics the shape of the ornate boats that compete in the annual races! A perfect gift for someone who enjoys one of the most adrenaline-pumping competitive sports!

Fittingly for such a powerful mythological symbol, the depiction of a Chinese dragon combines traditional artistic elements, show-stopping colour, and exquisite engraving! ULTRA-HIGH RELIEF FOR A MULTI-DIMENSIONAL EFFECT! Your coin was struck multiple times to provide unparalleled dimension and depth as the dragon's carefully sculptured head appears to rise up from the coin's flat surface and the turbulent waves! RE-CREATES THE COLOUR AND PAGEANTRY!

Like the ornately decorated dragon boats, the dragon on your coin is resplendent in selective colour! INCLUDES SERIALIZED CERTIFICATE: The Royal Canadian Mint certifies all of its collector coins.

Most of these are serialized certifications, meaning that each certificate is given a unique number, starting at 1. Limited to 6,000 coins worldwide. Your coin has no GST/HST. Designed by Canadian artist Simon Ng, your coin offers an artistic tribute to Dragon Boat Festival through the skilful fusion of ancient symbolism, traditional art elements and modern minting techniques. The lower portion of the coin is dominated by foam-tipped waves-an auspicious pattern that also adds a sense of motion to the design.

In fact, curved lines are present throughout this water-themed design, including the dragon's mane that evokes the sensation of wind and movement. Engraved in ultra-high relief for added depth and dimension, the serpentine spirit emerges from the water in a way that mimics the shape of a dragon boat, with its neck curved like a boat's gunwale. The dragon's features are resplendent in colourful hues of red, gold, green and blue, culminating in the blue pearl held tight in its jaw as a symbol of wisdom, and the active yang aspect of qi-the life force that surrounds us. The Duanwu or Tuen Ng Festival is a traditional holiday in China.

While the tale of Qu Yuan is the most widely known explanation for the festival's origins, some regions of China associate it with other legends-including those of Wu Zixu and Cao E. The dragon is one of the most powerful creatures in Chinese mythology! It is said to control the rain, the seas and all waterways-a divine energy that also symbolized imperial power. Dragon boat racing is believed to trace back to an ancient rite during a time of dragon worship, when participants appealed to the mythical spirit to ensure abundant rain for their crops. Waves are an auspicious pattern: they are often painted on the body of the boat, which is traditionally made of teak wood.

While the drummer at the front helps to keep time, the sweep at the rear also plays a key role by controlling the direction of the boat and generally coaching the paddlers. The first dragon boat race in Canada was held in July 1986, as a demonstration during Expo 86 in Vancouver, B. Your coin is encapsulated and presented in a Royal Canadian Mint-branded maroon clamshell with a black beauty box.

This item is in the category "Coins & Paper Money\Coins: Canada\Commemorative". The seller is "crossmod-half" and is located in this country: US. This item can be shipped worldwide.