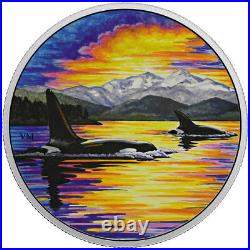 Encountering orcas in the wild is one of nature's most awe-inspiring sights, but here, during the hush of twilight, the scene is utterly sublime. Exquisite engraving and colour reveal a breathtaking image of two orcas as they swim along the Pacific Coast at sundown. Third coin in this spectacular 4-coin series featuring luminescent wilderness scenes that reveal the secretive movements of the cougar, lynx, orca and owl that have fascinated humanity for centuries.

Features innovative glow-in-the-dark technology that washes the scene with the glow of a sunset- the clouds, sky and water shine when viewed in the dark! A must-have keepsake portraying Canada's magnificent orca; a work of art that will be cherished by wildlife and nature enthusiasts, sunset revellers and anyone who has ever been whale watching or dreamed of that powerful and humbling experience. Only 4,000 coins available worldwide-highly collectible!

Canadian artist Vanessa Miller has captured the incomparable beauty of the Pacific coast during a spectacular sunset that sends fiery colour through the clouds and illuminates the mountains and coastline in the distance. The stillness is palpable when two orcas unexpectedly emerge from the glassy smooth water. Tiny waves ripple out as they cruise by, belying the size and power of the animals that are creating them. The day's final light glistens on the orcas' wet, streamlined bodies, revealing their signature white markings, and their distinctive dorsal fins-the tall upright triangular shape of a male, and the smaller backward curving form of a female.

This item is in the category "Coins & Paper Money\Coins: Canada\Commemorative". The seller is "westedmontoncoinandstamp" and is located in this country: CA. This item can be shipped to Canada, United States.