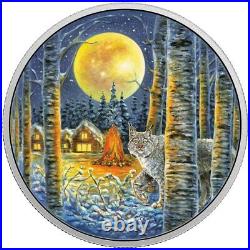 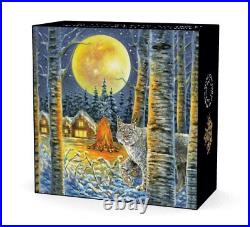 Savour the mystery of a full moon, and the rare and privileged sights that may be experienced under its radiance with this enchanting coin that brings you a sublime moment that outdoor enthusiasts can only dream of-a face-to-fur encounter with the ever-elusive lynx! Second coin in the must-have 4-coin ANIMALS IN THE MOONLIGHT series featuring wilderness scenes of a cougar, lynx, orcas and owl under the magical glow of moonlight-stunning designs that capture all the mystery of a full moon that has fascinated people for millennia. Features innovative glow-in-the-dark technology that washes the scene with moonlight-the moon, stars, windows, and bonfire shine when viewed in the dark!

A must-have keepsake portraying Canada's beautiful lynx; a work of art that will be cherished by wildlife and nature enthusiasts, star and moon gazers, and anyone who has ever sat by a fire under the light of the moon. Only 4,000 coins available worldwide-highly collectible! Canadian artist Curtis Atwater has created a quintessential scene of log cabins in the northern forest with a lynx hiding among the trees nearby. It is a clear winter night. A full moon dominates the sky while a bonfire burns in a clearing below. The perspective gives the viewer the impression that they are approaching the cabins through the trees and have suddenly come upon a lynx that has quite possibly been there undetected for some time. The lynx is immediately recognizable by its housecat-like face, distinctive ear tufts, and pronounced facial ruff. Its massive forepaw is raised as if the lynx was about to move on, but has decided to stop to examine this stranger who has brought all this activity into its woods. The lynx gazes directly at the viewer, confident and unafraid; as if it was its decision to allow itself to be seen-a magical encounter that will be painfully brief before the majestic cat slips into the shadows in silence. A cougar walks along the shoreline of the Pacific Coast.

Snow is rare here, but when it does fall, the effect is pure magic-a wondrous scene of enigmatic shadows and radiant light that comes to life with the exceptional colouring techniques on this coin. View the coin in the dark, and parts of the scene begin to glow. The moon and stars shine, and the water and snow glimmer as if touched by moonlight!

First coin in the NEW ANIMALS IN THE MOONLIGHT series featuring 4 wilderness scenes of a cougar, lynx, orcas and owl under the magical glow of moonlight-stunning designs that capture all the mystery of a full moon that has fascinated people for millennia. Exquisitely engraved with every detail beautifully enhanced with colour, plus an innovative glow-in-the-dark technology that washes the scene with moonlight-the moon, stars, water and snow shine when viewed in the dark! A work of art that will captivate anyone; a unique keepsake that wildlife and nature enthusiasts, as well as, star and moon gazers will cherish. Canadian artist Jan Poynter has combined quintessential elements of the Pacific Coast to create this fictional scene of a cougar approaching a stream on a snow-covered shoreline. Moonlight defines the cougar's silhouette, and dances on the water and snow. The majestic cat is looking towards the right, as if it has spotted its quarry in the distance. Behind the cougar, subtle shades of blue and gold paint a silent, snow-covered landscape of islands rising up from the calm waters of an inlet. A mountain range spans the horizon, its peaks visible in the moonlight. The moon also illuminates the clouds, and stars fill the gaps between them. This item is in the category "Coins & Paper Money\Coins: Canada\Commemorative".

The seller is "westedmontoncoinandstamp" and is located in this country: CA. This item can be shipped to Canada, United States.