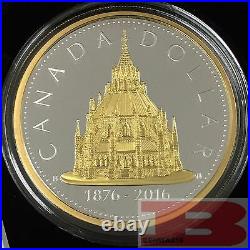 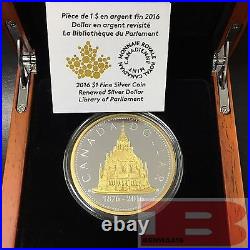 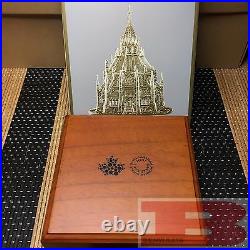 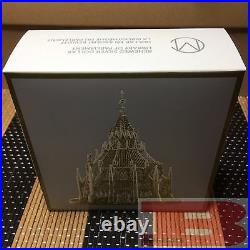 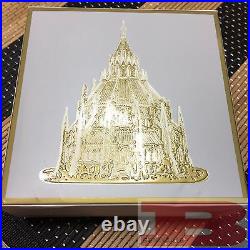 The second coin in our "renewed silver dollar" series celebrating historic proof dollar designs. This coin features Walter Ott's highly detailed image of the Library of Parliament and the original obverse tiara effigy of Her Majesty Queen Elizabeth II by British artist and sculptor Arnold Machin. LOW MINTAGE OF ONLY 2,500!

An exceptionally low mintage of only 2,500 coins means this 2 oz. Coin will be highly sought after. Features the Masters Club logo-printed prominently on the box sleeve.

Includes removable insert and special certificate compartment. TWO-OUNCES 99.99% PURE SILVER COIN! Your coin is GST/HST exempt! This 99.99% pure silver 1-dollar coin has a diameter of 50 millimetres and a nominal metal weight of two-ounces.

Its reverse features Walter Ott's image of the Library of Parliament from the 1976 silver proof dollar. The design presents the outside of the Library of Parliament in fine architectural detail, highlighting the building's buttresses, ornate windows, three-tiered domed roof, and other gothic details. The building and the coin's outer edge are plated in 99.99% pure gold. The obverse features the effigy of Her Majesty Queen Elizabeth II by Arnold Machin from the original 1976 commemorative silver dollar. The Queen's crown and mantle are plated in 99.99% pure gold.

Canada's first Parliamentary Librarian, Alpheus Todd, was also a renowned expert on parliamentary government and one of the founders of the Royal Society of Canada. The pre-Confederation fires and the 1916 fire are not the Library's only near misses. In 1888, the building survived a tornado-though the slate tiles on its wrought-iron roof dome did not.

These were replaced with copper. In 1952, a fire in the cupola caused significant smoke and water damage to the Library's interior, necessitating structural repairs and reproduction of some of the wood fixtures.

The library underwent a major renovation between 2002 and 2006 that included replacing thousands of square metres of copper roofing, removing bedrock to create a basement, and enhancing internal climate control to protect the integrity of the collection. The building in the Centre Block is the main branch of the Parliamentary Library, but there are a number of other branches across Canada.

The collection at the main branch includes approximately 600,000 works. Canada's Library of Parliament, located in the Centre Block of Parliament Hill, is remarkable for several reasons. Architecturally, it showcases the neo-gothic details of Canada's original parliamentary precinct design. Said to have been modelled on the British Museum's reading room, the library's circular structure is supported by sixteen flying buttresses. Its exterior of Nepean sandstone harmonizes with the building's picturesque setting on a promontory overlooking the Ottawa River.

The interior centres around a reading room commonly known as Canada's most beautiful room. Punctuated by a tall marble statue of Queen Victoria, this chamber opens to the vaulted ceiling of the cupola. Several rings of carved gothic windows encircle this roof at various elevations. The library stacks are made of handsomely carved white pine. The Library houses a body of works whose oldest items originated in the legislative collections of Upper and Lower Canada in the 1790s.

When the two regions (Ontario and Quebec) were united as the Province of Canada in 1841, the libraries were combined. The collection moved several more times, along with the location of the provincial and national capitals, before the present Library of Parliament building was completed in Ottawa in 1876. The library's popular claim to fame is that it survived the fire that gutted the heart of Parliament on February 3, 1916. He also requested that the entryway include iron doors that could seal off the precious collection.

Todd's foresight was drawn from experience in an era when lanterns, candles, and fireplaces were standard interior fixtures (along with cigars, pipes, and cigarettes). In 1849, most of the collection had been decimated in a fire set by protestors in Montréal. In Québec in 1854, the entire collection had been threatened by a fire that engulfed that city's legislative building.

Thanks to Todd's advance planning-and the quick actions of library clerk Michael MacCormac, who ordered the doors closed before the 1916 Centre Block fire could make its way into the Library-the stunning structure and its priceless holdings are with us to this day. Beautifully presented in a Royal Canadian Mint branded wooden box, lined with black flocking and including a removable insert and special certificate compartment. Composition: 99.99% pure silver. Finish: proof with selective gold plating.

We take our auctions/sales very seriously. This item is in the category "Coins & Paper Money\Coins: Canada\Commemorative". The seller is "benwa416" and is located in this country: CA.