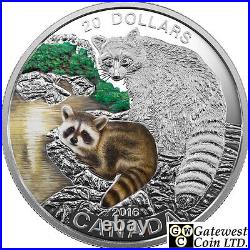 In a continuing celebration of the family bonds found throughout the animal kingdom, Canada's baby animals are beautifully depicted in a series of coins that feature selective colour over engraving. This fine silver coin depicts one of Canada's most identifiable creatures, the raccoon (Procyon lotor), and the strong bond that exists between a mother and her young.

This is the 8th coin in the popular Young Wildlife series of fine silver coins that feature heart-warming images of baby animals in the Canadian wilderness. Selective colouring beautifully complements the meticulously engraving and adds a life-like quality to this depiction of a baby raccoon and its mother in a wetland setting. Crafted from 99.99% percent pure silver, this striking coin has a limited mintage worldwide. A wonderful addition to any Canadian- or nature-themed collection. The reverse design by Canadian artist Trevor Tennant depicts a young raccoon alongside its mother on a summer evening in their wetland habitat.

As the sunset casts a golden glow upon the water in the background, this raccoon family begins its nocturnal activities. Both raccoons are beautifully rendered with fine detailed engraving that captures their soft expressions and the texture of their fur. A three quarter profile provides a magnificent view of the young raccoon's features, while selective colouring brings to life its grey-brown fur and distinctive markings-particularly its dark-coloured eye mask and ringed tail.

The adult raccoon stands to the right of her young, ever attentive to any signs of danger as the kit is poised on a rock along the water's edge, near the green vegetation that provides shelter for some of the aquatic creatures that sustain them in the wild. The obverse features the effigy of Her Majesty Queen Elizabeth II by Susanna Blunt. Please wait for an invoice before paying. This item is in the category "Coins & Paper Money\Coins: Canada\Commemorative".