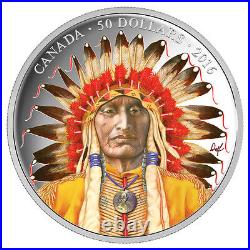 In a time when certain cultural practices of Canada's Aboriginal peoples were regulated or prohibited, individuals such as Wanduta risked prosecution to safeguard their sacred traditions. This fine silver coin honours the Dakota Elder and spiritual healer for his dedication to preserving cultural rites such as ceremonial dances, which are an integral expression of their Dakota identity. A commemoration of one person's courage and dedication to preserving the cultural traditions of his community and his people. Crafted from 99.99% pure silver with a limited mintage. Full colour brings this beautifully engraved portrait to life in outstanding detail-from Wanduta's traditional regalia and headdress, to the King George III medal worn around his neck. A stunning addition to any history- or cultural-themed collection, and an excellent opportunity to initiate discussion or raise awareness about the history and traditions of Canada's Indigenous peoples. DESIGN The reverse design by Canadian artist Darlene Gait features a full-face portrait of Wanduta (Red Arrow), a Sioux Valley Dakota Chief who defended the community's ceremonial dance rites when such activities were prohibited under the Indian Act. The full application of colour over the engraving captures the beautiful complexities of Wanduta's traditional regalia, circa 1913.

Finely detailed engraving adds texture to the eagle feathers that adorn the full headdress, as well as the beautifully coloured beads that are woven in a geometric design on the headband above Wanduta's brow. Around the spiritual healer's neck is a treaty medal-a symbolic display of a Dakota leader's peaceful intentions and a reminder of historic alliances with the British. The obverse features the effigy of Her Majesty Queen Elizabeth II by Susanna Blunt.

This item is in the category "Coins & Paper Money\Coins: Canada\Commemorative". The seller is "westedmontoncoinandstamp" and is located in this country: CA. This item can be shipped to Canada, United States.