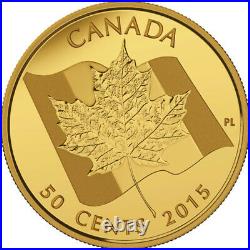 2015 50-CENT PURE GOLD COIN MAPLE LEAF. To Canadians at home and abroad, the red maple leaf unites us and instils a sense of belonging regardless of our different cultures, languages and beliefs. The Royal Canadian Mint celebrates the National Flag of Canada's 50th anniversary with a gold coin that pays tribute to our national symbol: the maple leaf.

The reverse design by Canadian artist Pierre Leduc draws its inspiration from Canada's national flag, which is seen in the background as it flutters in the wind. From its centre emerges a sugar maple leaf, which served as the original inspiration for the flag's stylized centrepiece. Finely detailed engraving recreates the leaf's five veined lobes and creates a natural, life-like appearance, which is further enhanced by the use of multiple finishing techniques. Engraved on the reverse is the word'CANADA,' the face value'50 CENTS' and the year'2015. The obverse features the effigy of Her Majesty Queen Elizabeth II by Susanna Blunt. This small, affordable gold coin allows collectors to celebrate their pride for their country on the 50th anniversary of the National Flag of Canada. Certified 99.99% pure gold, this is the 13th in the Royal Canadian Mint's annual 1/25th oz. Highly detailed engraving on this remarkably small-sized coin is testament to the artistry and craftsmanship for which the Royal Canadian Mint is internationally renowned. From its delicate veins to the small creases and textures, meticulous engraving gives the maple leaf a life-like appearance that is further enhanced by the use of multiple finishing techniques.