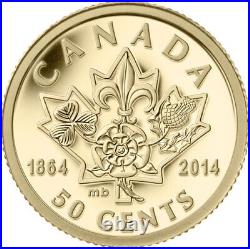 The simple but rich design features the raised outline of a maple leaf. Inside the maple leaf are the four floral symbols of the major European settler groups represented in the Province of Canada and the Maritime provinces at the time of Confederation: the French fleur-de-lis at the top of the leaf, the English rose beneath it, the Irish shamrock on the left side of the image, and the Scottish thistle on the right.

A limited mintage of only 7,500 coins means that this beautiful gold coin is sure to be sought after among collectors. This proudly patriotic coin features the floral symbols of the major European settler groups represented in the Canadian provinces at the time of Canadian Confederation: the French fleur-de-lis, the English rose, the Irish shamrock, and the Scottish thistle. A beautiful addition for any collector who enjoys history, historical events, Canadian politics and political history, unique design, original art, or Canadiana.

ADVERTISING DATE: September 2, 2014. This item is in the category "Coins & Paper Money\Coins: Canada\Commemorative".