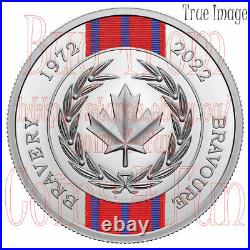 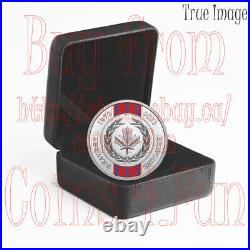 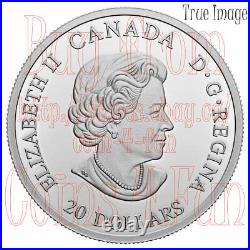 Courage and heroism are always worth celebrating, and in the 50 years since Canada's Medal of Bravery was first established, nearly 3,300 gallant souls have been honoured for courageous actions that impacted Canada or Canadians. From intervening in an attack to rescuing people from a submerged car, their "acts of bravery in hazardous circumstances" qualify these everyday citizens as everyday heroes among us; and by selflessly risking their lives to save or protect another, they have earned this nation's gratitude and admiration, as well as one of Canada's top honours for courage: the Medal of Bravery, which is highlighted on this coin in honour of its 50th anniversary.

The Medal of Bravery at 50! Celebrate a half century of recognizing selfless acts of courage. A CANADIAN CELEBRATION OF COURAGE! Celebrate the 50th anniversary of Canada's Medal of Bravery with this fine silver coin, which pays tribute to the award's recipients. Their selflessness is one of our great strengths.

This coin is an expression of gratitude to those who are willing to risk their lives to save or protect another. Of 99.99% pure silver, your coin beautifully recreates several of the Medal of Bravery's design elements, including its maple leaf insignia and inscription. Another important feature: the medal's ribbon, which is red with blue stripes! On your coin's reverse, a textured colour application captures the look and feel of the ribbon issued with each medal. The medal's design elements have been combined in a unique way to fit on your coin's reverse, but each one has been rendered based on technical drawings by Cathy Bursey-Sabourin, Principal Artist and Fraser Herald at the Canadian Heraldic Authority.

Even the inscription, "BRAVERY BRAVOURE", is engraved in the same font used on the medal. Only 6,000 are available to collectors worldwide. The Royal Canadian Mint certifies all of its collector coins. About the Medal of Bravery In 1972, Her Majesty Queen Elizabeth II established a group of medals recognizing courageous acts: the Cross of Valour, the Star of Courage and the Medal of Bravery.

These are Canada's Decorations for Bravery, which are awarded based on the degree of peril faced by the recipients. The Medal of Bravery is one of Canada's best known civilian honours for acts of exceptional courage. Since its inception, the Medal of Bravery has been awarded by the Governor General of Canada to nearly 3,300 people-Canadians and others, civilians and combatants, living and deceased-in recognition of "acts of bravery in hazardous circumstances" ranging from animal attacks to burning buildings.

The act of bravery does not have to take place in Canada, but it should involve at least one Canadian and/or Canadian interests. Any person or organization can nominate someone they believe deserves the Medal of Bravery though nominations must be submitted to the Chancellery of Honours at Rideau Hall within two years of the incident. Design: Your coin commemorates the 50th anniversary of Canada's Medal of Bravery through its recreation of some of the award's most distinctive features. The medal's insignia is engraved at the centre of the coin's reverse, where a maple leaf is surrounded by a laurel wreath.

Engraved along the outer rim is the inscription "BRAVERY BRAVOURE", as well as the double dates "1972 - 2022" marking the milestone anniversary. A colour application recreates the look and feel of the medal's red ribbon with blue stripes.

The coin's obverse features a denomination of "20 DOLLARS" and the effigy of Her Majesty Queen Elizabeth II by Susanna Blunt. You don't have to be Canadian to be awarded the Medal of Bravery-in fact, the incident could even take place. Of Canada, so long as it involves at least one Canadian and/or Canadian interests. This isn't the first Canadian coin to feature the Medal of Bravery design: it was featured on a commemorative 25-cent circulation coin issued in 2006, as well as a Special Edition Proof Silver Dollar and a Limited-Edition Proof Silver Dollar with colour enamel.

It's also the subject of our first 2022 Moments to Hold coin! The first medals were awarded in July 1972, just two months after the Medal of Bravery's inception.

The silver medal is worn suspended from a red ribbon with three blue stripes; for female recipients, the same ribbon is fashioned into a bow. Recipients of the Medal of Bravery are entitled to have the letters M. Placed after their name to denote the honour e. Packaging: Your coin is encapsulated and presented in a Royal Canadian Mint-branded clamshell with a black beauty box. Jason Sikoak (reverse), Susanna Blunt (obverse). I do leave feedback for everyone. This item is in the category "Coins & Paper Money\Coins: Canada\Commemorative".fun" and is located in this country: CA. This item can be shipped worldwide.