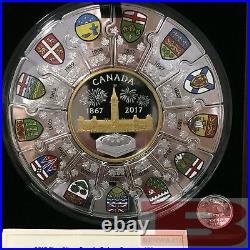 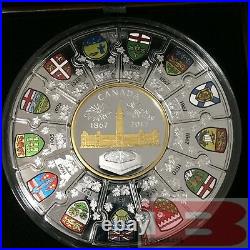 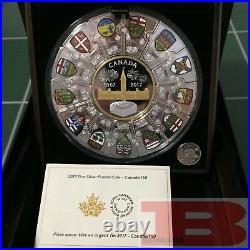 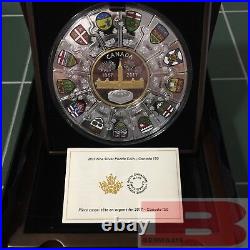 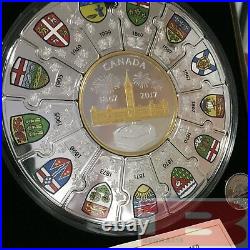 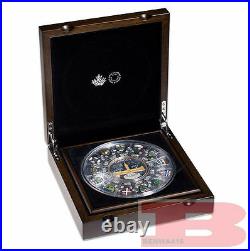 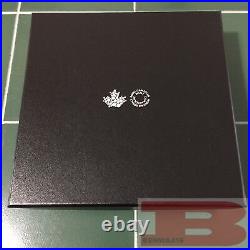 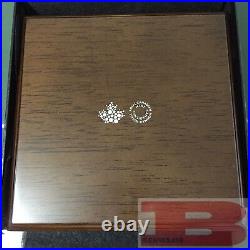 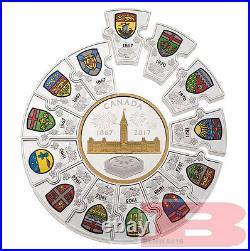 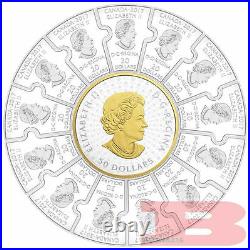 Pure Silver Puzzle Coin - Canada 150 - Mintage: 800 (2017). If you look at some of the pictures I provided, I have added a five cents piece to give you a sense of scale of this coin. It is massive, a half kilogram of pure silver and beautiful art work from the mint. With a production of only 800 pieces world wide, looking forward in time, this will become an extremely valuable piece.

THE MINT'S FIRST-EVER PUZZLE COIN! Like a puzzle, Confederation came together piece by piece, every part clicking into place over time, the end result greater than the sum of its parts. Your 14-piece puzzle coin delivers a unique portrait of Canada that will be the highlight of your distinctive collection!

Thirteen pure silver, jigsaw-shaped coins with coloured shields encircle a gold-plated silver coin of Parliament, in the order each province and territory joined Confederation-an exceptional keepsake of this historic moment. Then you'll love this Canada 150 puzzle coin! Special features: THE MINT'S FIRST-EVER PUZZLE COIN! Your coin is a numismatic breakthrough in precision craftsmanship beautifully crafted in 99.99% pure silver with selective colour and selective gold plating! Your coin is an unmatched portrait of Canada rich with heraldic artistry, historic prestige, and cutting-edge technology. Your coin is a must-have for dedicated numismatists, history buffs, and anyone seeking to mark Canada's 150th anniversary with a prestigious collectible that will stand the test of time! Measures an impressive 123.7 mm in diameter of pure silver (99.99%). Each piece of your 14-piece puzzle coin features the effigy of Her Majesty Queen Elizabeth II by Susanna Blunt! GOLD PLATE SELECTIVELY APPLIED TO CENTRE COIN! On the centre coin only, both the effigy is selectively gold plated, as well as the edge flat. CLOCK INDICATES THE TIME WHEN FIREWORKS USUALLY BEGIN! INCLUDES SERIALIZED CERTIFICATE: The Royal Canadian Mint certifies all of its collector coins.

Most of these are serialized certifications, meaning that each certificate is given a unique number, starting at 1. Your coin is GST/HST exempt with a limited worldwide mintage of 800 coins. Design: Canadian heraldic artist Cathy Bursey-Sabourin has recreated Canada's 13 provincial and territorial shields on a series of jigsaw pieces that encircle a central coin to create a large, 14-part coin. Each shield is exquisitely coloured and presented in the order each province and territory entered Confederation. A garland of maple leaves visually connects the pieces and carries a ribbon with each province's and territory's year of entry into Confederation.

The central coin features a selectively gold plated Centre Block of Parliament Hill with the Centennial Flame burning in the foreground. This puzzle coin was inspired by the Centennial Flame featured on the central coin. The Centennial Flame is located just inside the Queen's Gates in the forecourt of Parliament's Centre Block. It was originally a temporary installation for Canada's centennial celebrations in 1967, but became permanent due to its popularity. The basin is made of red Canadian granite and features the bronze armorial bearings, floral emblem and year of entry for each province and territory that was part of Confederation in 1967.

The water represents Canada's three oceans, and the flame burns 365 days a year as a symbolic light to lead Canada into the future. Nunavut is Canada's youngest territory and was created 32 years after the Centennial, on April 1, 1999. As such, it was not part of the Centennial Flame. Nunavut also distinguishes itself by using a round shield instead of the traditional pointed shield shape.

This coin was designed by Canadian heraldic artist Cathy Bursey-Sabourin who has produced the artwork of some of Canada's most visible emblems. Terms of Sale: Please refer to photos for accurate depictions of this item. All Buyers: We take our auctions/sales very seriously. This item is in the category "Coins & Paper Money\Coins: Canada\Commemorative".

The seller is "benwa416" and is located in this country: CA. This item can be shipped to Canada, United States.